The Castle of Celsa

From the 13th Century to the present time

The Castel has belonged to the same family for about four centuries.
The peculiarity is that, since 1612, it has often been inherited by the females of the family; from the noble de Vecchi family from Siena to the Florentine Antinori family to the current owners of the Aldobrandini family.

The history of the Castle

Celsa is located along a secondary road of the “via Francigena”, which takes you from Colle Val d’Elsa to Siena and overlooks the wonderful landscape that stretches from Siena to Monte Amiata. The original Castle dates back to the 13th century; during the 16th century, the Celsi family from Siena decided to refurbish it and transform it into a country house.  The project was commissioned to the architect Baldassare Peruzzi, whose intervention can be seen in the beautiful circular chapel and the terraced wall, embellished with niches aligned to the entrance pathway.

After being destroyed by the imperial troops of Charles V in the middle of the sixteenth century, it was handed over to the de Vecchi family.  At the end of the nineteenth century Maria Antinori Aldobrandini, daughter of Giulia de Vecchi and great-grandmother of the current owners, commissioned architect Mariani to make a further transformation of the Castle, by raising the east tower and crowning it with battlements, bringing the building to its present form.

The name Celsa probably derives from “excelsa sedes Virginis “; another theory suggests that it refers to the Celsi family, from Siena, who owned the castle for centuries.

The original site dates back to the 13th century; initially it was a dark stronghold overseeing the valley towards Siena.  In the 16th century, the Celsi family commissioned architect Baldassare Peruzzi to “free the imprisoned home and soak it in light and sun”, as written by Shepherd and Jellicoe, who visited it in the 20s of the past century.  They also wrote that ” the delicate magic of Peruzzi’s hand touched the original walls, accentuating their strength through the delicacy of the additions he made, in a way that is a revelation in the art of transforming the formal to informal “.

Peruzzi’s work is recognizable in the circular chapel, in the niches and on the terraced wall which runs alongside the entrance path.

With a trapezoidal inner court, closed by a powerful wall with three big openings which face the Italian Garden, the cleverness of the project comes from the way the medieval structures have been absorbed in a completely modern conception; the result is an original layout with three large arched openings that lead to another terrace to the Italian Garden.

Mino Celsi (1514-1575), who probably first conceived this ambitious project, invited the Archbishop of Siena Francesco, Bandini Piccolomini to seek rest in this shady tranquillity with the following  words: “Tu canzonetta mia rozza ed incolta torna ti a Celsa, e guarda, che la quiete mia non ti sia tolta”. This could be translated as “You, rough and ignorant little song of mine, come back to Celsa and make sure that my peace is not taken away”.

In 1554 Celsa was destroyed by the Charles V imperial troops. At the beginning of the 17th century the Castle of Celsa was passed on from the Celsi family to a noble family of Siena called de Vecchi, to whom it belonged until mid-1800, when it was brought as a dowry by Giulia de Vecchi, who married the Marquis Amerigo Antinori.

At the end of the 19th century, Giulia’s daughter, Maria Antinori, married the roman prince Giuseppe Aldobrandini; during those years the architect Mariani was commissioned to transform Celsa: the east tower was elevated and the building was crowned with battlements; mullioned windows were opened, the plaster was scraped to reveal the original stones. Upon the death of Maria and Giuseppe Aldobrandini, the Castle was handed down to their son Clemente, whose wife, Luisa von Welczeck, restored the park and the Italian garden to their original state. 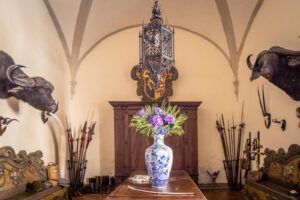 See photos of the property

Our staff will answer you as soon as possible.